So many things have happened that simply makes this election a shame or a disaster waiting to happen.

Mr. Fayose and Mr. Fayemi have been alleged to be distributing raw and cooked rice to woo voters. There are so many pictures flying around on the internet and especially on social network that shows how rice has been used as one of the campaign instruments. 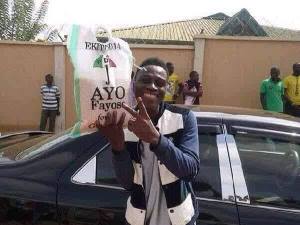 A lot of monies that will not be accounted for have been spent by both the PDP and the ACP, the two main parties hoping to “seize” power in Ekiti.

Now, the latest in the series of the disgraceful countdown is that the Nigerian Police is now storming Ekiti with guns, ammunition and dogs. When “armed forces” and dogs are unleashed for the purpose of election, you can tell how the mentality of the average Nigerian works.

Elections in Nigeria are do or die processes because the next governor of Ekiti as in the case at hand is going to be the custodian of the state treasury. This battle has very little to do with public service but a lot to do with ego and personality. It has a lot to do with the potential looters of public funds in Ekiti State.

These are the tragedies of the nature of politics and public service in Nigeria.

During and after the elections, the death toll will be interesting to know.

When is this country Nigeria going to grow up?