It is the people of Nigeria who have turned all their attentions away from what brought them to the present predicament that threatens the totality of their existence. The thieves in government have kept their focus intact.

In almost every part of the world one of the most talked about phenomena these days is undoubtedly the “bring back our girls” campaign. It is this sort of scenario that some opportunists (individuals and groups) have waited for to bring them back to public space and to win sentiments borne plainly out of hypocrisy and eye/lip services. Some are simply capitalising on the situation to give their own agenda a lift.

Meanwhile as the government of Nigeria was perambulating and talking rubbish everyday and buying the time it doesn’t have, the business of stealing and cover-ups in government are going on as usual. It is possible because stealing according to Mr. Jonathan is not corruption and because the people are suffering from the Nigerian syndrome. I have defined the Nigerian syndrome in a previous essay.

One thoughtless fellow called Maku spoke on behalf of the government and said that it is the main opposition party that is organising the “bring back our girls” campaigns. I didn’t know that all the people bouncing on the trampoline of the campaign around the world including notable celebrities in Hollywood now belong to the Nigerian APC. The APC of Nigeria must be the biggest political party in the world.

The people of Nigeria are easily distracted. This is a recurring dilemma for them. They cannot keep up with the loads of distractions provided by the failed and selfish governments since 1960. They don’t asked questions once you load them with deceits. When they asked questions, they move onto the next thing without seeking answers to their questions. Stupid answers are often satisfactory. These are parts of the reasons why nobody has found the courage to call Babangida a thief and initiate his prosecution for all the missing oil money during the gulf war.

Now Nigerians have forgotten about the unanswered allegations of several billions of dollars that the Jonathan government also cannot account for. This confused government set up a committee to look into the matter. That in itself is a partial admittance that something is missing anyway. Then in the middle of the entire wahala Mr. Jonathan went on air during his chat to tell the world that “America will know” if billions of dollars is missing.

Why did Jonathan set up a committee to ascertain the allegations made by the central bank? Mr. Jonathan should just have asked “America” since “America will know”. Anyway the senate committee has now dismissed the allegation and concluded that “no money is missing”. This is despite the fact that there is absence of proper coordination between Nigeria’s financial bodies concerned with the sale of crude oil. We can now turn off the sound of Fela’s music-Oil money is (not) missing.

In any case the Nigeria house of representa-thieves and legis-looters are not unfamiliar with the way the corrupt government of Nigeria operates. Nigerians have myopic memories and are long-suffering. Nigerians are the most distracted group of citizens in the world. They suffer from their own syndrome-the Nigerian syndrome.

Many arguments, verbal or written efforts to make Nigerians reason are lost on many grounds not least on the tribal cards. Don’t argue with an average Nigerian on the tenets of good governance. The Nigerian syndrome is yet incurable. Yea right, the problem of looting did not start with Jonathan…why should we complain now? Why did you leave out Obasanjo? What of Shagari? The reasons not to start and finish the war on bad governance have been integrated into the cycle of idiocy in downtown Bongo.

The ethnic card will even be used to justify the crimes committed by one governor Akpabio. This man has ruled for 7 years in Akwa Ibom and as he prepares to leave the seat of government, he ensured that his financial future is secured. In Nigeria, criminals continue to parade the government houses in different forms and shade.

The selfish and self-serving Governor of Akwa Ibom, Mr. Akpabio (This man has no record of mental or physical disability to support his pension. But he will get:N200 million per annum, basic, N100 million, medical allowance, 5-bedroom maisonette, Accommodation allowance of 500 per cent of annual basic salary, Medical allowance not exceeding N12 million per annum for one surviving spouse)

There is definitely going to be an argument that he was a good governor or that he could have looted the money anyway like Babangida and others. In Nigeria a critic may never win any argument. The Nigerian syndrome is vast.

In Uyo and across all of Akwa-Ibom, I’m looking forward to the following campaigns, #akpabiobringbackourmoney

Nigeria remains in a big mess today for several reasons that some of us are not tired to write about every week. It is very important that the collective intellectual consciousness of the people do not give in. It must not dwindle. It must tarry and persist. For in relenting, evil will continue to rise and subdue good totally.

Nigerians must know that there will be no messiah in Abuja, not now, not in 2015. The system of government is so ill-structured that Abuja would not be a major factor for the eventual freedom and stability of Nigeria. Hence it is very important that we don’t forget to tune up the ways that may end the senselessness in government whilst we point out the persistent evil and crimes in the land,

Nigerians must ensure that the non-corrupt intellectual class rises up to do the needed. In several states in Nigeria, former criminals, former thugs and former riff-raff hold sway in governance. Government has been used to reward insolence and barbarism. In government it has remain impossible to be above board. All who come into it exit it as criminals or with criminal tendencies. It’s worse for those who came in as criminals. Regardless they all ruined Nigeria! 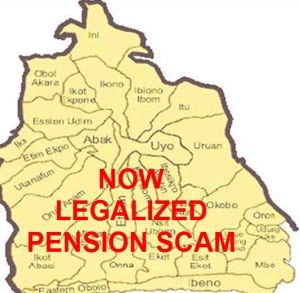 In every region, in every community, in very part of Nigeria, there is a need to change the mentalities of the people. I am aware of the agitation of the people from Western Nigeria. They are seeking self-determination or autonomy. But they must know that some people amongst them were part of the problems with Nigeria. They have been part of this nonsense going on in Nigeria since the fake independence in 1960. Therein lies a huge danger ahead should Western Nigeria emerge today.

The autonomy of Western Nigeria should not be sought as a license for the elongation of criminalities in the Oduduwa region. Before dawn, the Yorubas should have a full functional road map and blue print that will ensure that their self-governance does not lead to self-destruction.

In the end all the geo-political regions of Nigeria should be allowed to determine their own future. The benefit or probability of marching on Abuja/Aso rock by criminals and terrorists should be zeroed.

I strongly hold the personal view that irrespective of the aims of the Northern terrorists, and irrespective of the primary goals of their sponsors, the dismantling of the useless unitary government will promote the emergence of regional autonomy and make a complete mess of their ambitions. Who will march to Abuja or throw bombs in Abuja if there is no government there to be overthrown or if the power in Abuja is ceremonial?

I reiterate that no group of people would allow its own race to self-destruct or to be persecuted unjustly when the conditions for social justice and fair play are the rules and not the exceptions. A word is enough for the wise goes the Yoruba adage. When received, it becomes whole within.

Talking about social justice, what is good for the goose is good for the gander. I hope that Mr. Akpabio has made plans to ensure that all the unemployed people of Akwa Ibom will enjoy some benefits. If the people of Akwa Ibom have no social security in place, they have the right to sack all the dummies who rubber-stamped Akpabio’s looting largess.

If the people of Akwa-Ibom remain quiet and passive, they are drowned in the Nigerian syndrome. They are probably distracted as the looting continues. They are not alone, Nigerians are all guilty of the lack of will to sack corrupt governments and make them face proper justice. They are guilty of being at home with a system that is not working. It beats my imaginations!

(After publishing this story, there are now more information that some ex-governors in Nigeria started this criminal activity of milking the states they ruled over, so Mr. Akpabio is not the only governor with criminal tendencies. There are many of them in Nigeria)