It is better for Buhari to sacrifice his ego than for all of us to allow the APC-Buhari mandate to sacrifice Nigeria. President Buhari should be on his farm tending his cattle or country home playing with his grandchildren. If not now, when does he want to rest? 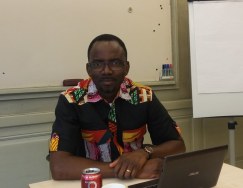 Nigeria enters her 56th year as an independent country in deep sorrow. Nigerian politicians who are largely responsible for the economic woes, recession and depression in the country are discussing how to sell the national assets. These politicians fit the expression The Lucky Bastards!

Who sells his father’s house or property without due consultations if not a bastard?

But the real reason Nigerian politicians are the lucky bastards is because they live in a country where there is no rage, yet people expect a change. That’s actually a huge joke.

There are not so many countries in the world where criminals rule the people and get away with it. There are too many examples to draw from but just the flash of news that the case against Mr. Saraki will be dropped, for example, reminds one that Nigeria is not a real country.

In real countries, there would be rage, occupation and sacking of criminals in government by force. The people will see to that.

Nigeria at 56 remains that geographical area where some people captures the center and oppress the rest-more than 100m. The exact population of Nigeria is not known as the northern part of the country is largely exaggerated in terms of the actual human population.

Whose assets are up for sale really? Who has the right to sell the people’s assets without a referendum or a long-term discussion on the benefits and disadvantages of selling national assets?

The common man on the street does not even know what a national asset means. In his world there is no difference from the crimes that has been perpetrated against him through looting of crude oil proceeds or mismanagement of revenues from other sources and the anticipated looting of the proceeds of the sales of Nigeria’s national assets.

At 56, Nigeria is crawling. It is a big shame and a serious embarassment to the country that (ridiculously) brands herself as the giant of Africa. As far back as the early 90s, a lot of us joke that Nigeria is the sleeping giant of Africa.

In what ways can we now describe Nigeria? The dead giant of Africa will be appropriate. We have the bunch of lucky bastards to thank for that.

But seriously, who could have thought that the second year (now approaching) of the APC could have landed Nigeria into further mess? Only a few of us saw this coming. I remember how we were told to give the APC time. I remember how l always write that Nigeria has no luxury of time.

In several essays l kept complaining about the deviation of the APC from real governance.

In January 2016 l wrote that we cannot go on like this when the prices of goods and services hit the roof. If january 2016 was compared to september 2016, the january month was still a child’s play in terms of the hell that now prevail in Nigeria.

I was in the country to see things myself. It’s a sad situation.

Some people argued that some of us are impatient, that we should give the APC time. Now these people are quiet and they have disappeared from the social network because the APC has failed them. They are embarassed.

But when some of us write about Nigeria, we should not be seen an anti-government or anti-establishments. I think we go out of our ways to provide that check and the slim life wire that the hope of the common man hinged upon.

Total silence will lead to escalated genocide perpetrated through diverse mechanisms: hunger, road accidents, corruption, deprivation, inequality, injustice, lack of health, lack of education, lack of electricity, rise in social injustice, maladministration and outright war on the people as in the South East and the Niger Delta region.

I write about Nigeria because l’m hoping to one day live in the country that my mother described before she passed to glory. That country where she commuted by rail, walked Yaba to Ojuelegba and Oni Street Surulere by night, left her job to concentrate on family (thinking that things will always be the same, rosy) and procreated (not knowing that poverty could ever knocked on anyone’s door in western Nigeria).

I want to live in the country of my mother, the one that western Nigeria gave her. That’s why l write about Nigeria.

But the lucky bastards stole my future away in Nigeria. They refused to plan for my today. Not even one of them (from 1960 to 2016) will accept that they have done wrong. Rather they are still looting! Unrepentant criminals!

I am a long shot from the dream of living in the country my mother described. The distance was made longer when the APC lost the track very early in the navigation process of the APC-Buhari mandate.

If l am to live in the country that my mother described, the only thing l can ask for at this time in addition to good governance, is the resignation of President Buhari. He has failed and there are no signs that he will succeed before the end of this first term in office. If a miracle happens, he will bring Nigeria to the place it was when the corrupt PDP was sacked in 2015. They are all corrupt up till now. The lucky bastards!

If the APC-Buhari mandate maintains the status-quo, their first term report sheet will end with Nigeria buried in the sand. A country may not be left to govern!

There are so many reasons why president Buhari should resign. More than one year in office, he continues to blame the PDP for his failures. As a teacher, l would have sent (student Buhari) to the special education department. He needs help. He cannot lead successfully.

In the interest of the country at large and to rescue what is left of the first term of a tumultous and corrupt regime, the APC needs to do very quick analyses of her campaign slogans, manifestos and programs and find out what has gone wrong. The country is more important than individual interests or ego.

In an attempt to get back on track, the party should ask Buhari to step aside to allow for fresh minds and active millennium-compliant brains to help the country get back to productive ways again. In 2 years, a lot can still be put together. Someone in the APC needs to stop blaming the PDP. We all saw the problems before the change slogan was activated. Give us a clear blueprint!

Many people, at private discussions, have laughed about my suggestion that Buhari needs to step aside because politicians don’t resign or step aside in Nigeria.

President Buhari’s case is different, he is old and should be in his country home playing with his grandchildren. If not now, when does he want to rest? He needs to go home to Daura and let us retrieve our country from ruins.

It is better for Buhari to sacrifice his ego than for all of us to allow the APC-Buhari mandate to sacrifice Nigeria.

In more than 15 years of writing about Nigeria l have seen the country sailed without the men who thought that Nigeria cannot continue without them. The list will grow with time.

The APC must remember the first item on her manifesto/program. One of the long-term solutions to the several problems plaguing Nigeria is the political solution. We miss the country where our parents and grandparents thrived before the civil war. It is there (to the regional governments)  we must return and start to rebuild.

A country that is a fool at 56 is as good as dead!

One thought on “Nigeria @ 56: The Lucky Bastards!”