Since lies are too hard to maintain Mrs. Iweala has sang a new song and the whole world is laughing at Nigeria. She delivered the recovered loots to Dasuki.

The hysteria that normally trail announcement of loots stolen and recovered have been with Nigeria since after independence in 1960. They come and go…

Nigerians are still dancing to the music of late Fela Anikulapo Kuti. He sang often of bad governments and how they looted the treasuries.

Nigerians are not asking, what happened to all the loots that have been stolen, recovered and relooted.

I am going to repeat something that has happened twice in the last decade under two different dispensations.

When Mrs. Iweala stopped dragging her foot and decided to give accounts for the Abacha loot under Obasanjo’s reign, she gave an account that was very ridiculous. She pointed out to a few things that were already provided for in the budget as what Abacha’s loot were used for.

Recently l saw that she had done exactly the same thing for the reign of Jonathan. She gave a report that the funds (it appears Abacha looted the whole world or what) were used to construct roads.

Since lies are too hard to maintain Mrs. Iweala has sang a new song and the whole world is laughing at Nigeria. She delivered the money to Dasuki.

A few weeks back l wrote an article: Why Are Our Politicians Criminals? On behalf of over 100 million people suffering and living under the poverty line, I am asking again: Why Are Nigerian Politicians All Criminals?

Since Nigeria always have a budget then it means that loots and recovered loots especially should be bonus or boost for the Nigerian economy. Also since the lies of the Nigerian government has become visible, thanks to Mrs. Iweala’s inability to be consistent with her lies, then it was high time to make new demands especially from a government that promised us change. 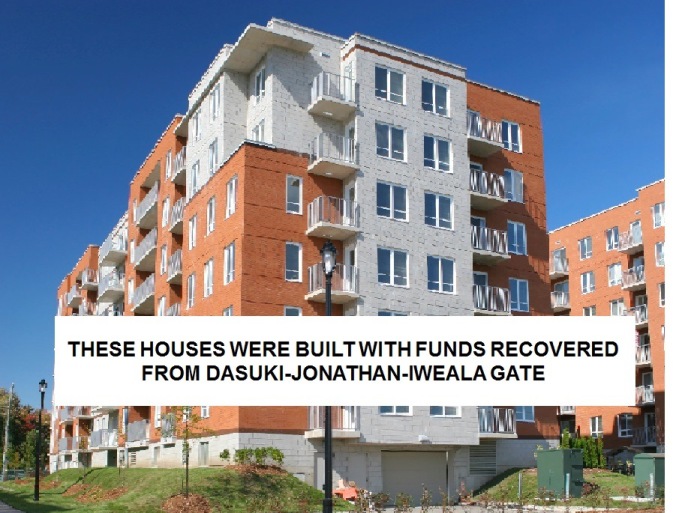 Let me be clear.

Can we have a proper account of the monies that have now been recovered from the Dasuki-Jonathan-Iweala loot? And please let no moron toll the line of Mrs. Iweala, don’t try to tell Nigerians that the money has been used for this or that. We know already that you are lying. So, don’t go there..!

From now on, Nigerians will like to see a TAG on recovered loots.

The images connected to this article are suggestions on how to be transparent on what happened to recovered loots.

Nigerians must see how looted funds can be effective life changers for them. APC must show if the change slogan is real or a fuss. Time will tell

Let’s TAG the projects executed with looted funds that have been recovered and let’s not use what the budget has provided for as covers for relooting recovered funds aka Iweala looting method 101.

We are watching the APC mandate 2015-? to see what they will tell us that they have done with the recovered loots. There is no where in the budget that shows that anything will be done  with recovered loots, so that should be a bonus boost to the economy that is today lying in ruins and desolation.

Watch out and read a follow up to this article. It will be titled, 2015 It  Was Not A Great Year.

One thought on “So, Where Are The Loots? Let’s TAG them.”