In 6 weeks Nigerians will know if a tyrant is born or not. They will know if the military will be in charge to complete the February 7 coup

The Unveiling Of Africa’s Latest Tyrant? 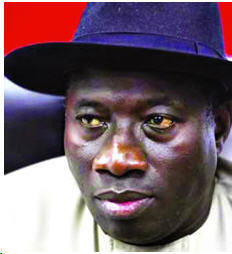 Nigeria in 2015 probably has a new dictator in the making. His name is Goodluck Jonathan. The man is a famous drunkard who rode on luck to become the ruler of Africa’s most populous country.

In a sane society a man so incompetent, clueless and thoughtless would not near the seat of governance. The way he and his wife have been running Nigeria is a complete disgrace to the intellectual capacity of the African minds. Mr. and Mrs Jonathan stain and embarrass Africa, greatly.

The rise of Jonathan to power will remain one of the darkest episodes in Africa’s modern history.

Trillions of dollars that could have brought prosperity to every Nigerian family are now missing and shared with a group of corrupt people who are already members of the influential 1% that owns 80% of the country’s wealth and who together continue to enslave the majority of the population.

The present ruling government, like all the previous ones before it, contains people who should be tried for crimes against humanity for rapidly spreading and escalating poverty among the majority of the population.

The problems Nigeria face today did not start with the criminal minded Jonathan and his wife but under them the situation reached a new dimension with alarming consequences.

The coming days and months will reveal the willingness of Nigerians to liberate themselves or to remain in bondage for a much longer time.

Mr. Jonathan turned to the military and staged a coup on the 7th of February 2015. The army told the world that it cannot secure 14 local governments for 2 days of election!

So the electoral committee was left with no choice but to postpone the elections.

If the army cannot protect 14 local government for 2 days, that army must be the MOST USELESS army in the history of mankind. We know what ordinary vigilante groups can do within a locality.

But that was not the truth. Mr. Jonathan was afraid of defeat at the polls. The opposition headed by a former dictator Gen. Buhari was poised for victory at the polls.

Postponing or cancelling the February polls was a décor to halt the certainty that the opposition will displace the corrupt, lazy and incompetent administration of Jonathan that continues to loot and rape the country blind.

The military taking on the function of the National Assembly in postponing the elections has invariably committed treason and carried out a coup. The coup was sponsored by Jonathan and this may mark the beginning of his reign of tyranny if Nigerians do not disengage him as soon as possible.

Six weeks from now, Boko Haram will still be in existence. There is no way Jonathan and his coup plotters can rid North Eastern Nigeria of Boko Haram in 6 weeks. Why have they not done in 6 years what they now what to do in 6 weeks? Only fools will believe the lies of the Nigerian army and Jonathan.

The most efficient way to fight terrorism or insurgency is never to give the impression of weakness. It must have taken a fool and a clueless mind to act otherwise. Cancelling the February elections is the hallmark of cowardice and lameness.

The saving grace for the February 7 coup is that the constitution was buoyant enough to absorb the adjustment. If the elections are postponed again, the constitutions will not be able to accommodate the changes and the rule of Jonathan will therefore become illegal.

If this happens, the opposition will be right to fulfil its threat of floating a parallel government. Jonathan is ready for war and that is why he has depleted the Nigerian army and equipped his militia group in the Niger Delta.

He has secretly and openly unleashed the Nigerian army on the opposition. Soldiers who should be fighting to keep the 6 weeks target intact are watching over the opposition in compliance with the orders from Africa’s latest dictator.

All the characteristics of a tyrant and a dictator are emerging from this criminal called Jonathan. He is afraid of going to jail one would think and therefore not ready to lose or hand over government to the opposition.

His loudest bulldog one Mr. Okupe said that Jonathan would rather hand over to an interim government or to the military rather than to the opposition.

In making such a statement, the camp of Jonathan already conceded defeat even before the elections. The morning shows the day.

The lazy army generals who could not protect 14 local governments for 2 days are waiting in line if all the plans of Jonathan fail.

They have already staged a coup on February 7 2015, one can assume that they are just waiting to announce a new military government in 6 weeks.

Mr. Jonathan is following a script no one has seen or heard of. He is taking his cluelessness to a new height because of the urge to remain in power at all cost. It is easy to predict that he will be put to shame soon. He is the proverbial Yoruba dog that wants to get lost totally.

I hope all the pastors who prayed for his victory at the botched February 14 2015 elections can now see that they are also fools. They were taken for a jolly ride by the clueless crook from the creek.

Mr. Jonathan is testing the waters. By now he ought to have been drowned in the test. Historically he is stretching the limits of the people’s resilience when he cancelled an election that took the electoral commission 4 years to prepare for.

What Mr. Jonathan must know is that Nigerians are not expecting a miracle from anyone who takes over the mantle of rulership from him. What is certain is that irrespective of the nature and consequences of the change, the people are poised to try it out and see where it takes them.

People are sick of his cluelessness and dumb brain.

The common voice of the majority will remain the voice of the gods. It shall prevail. If Nigeria exists after Abacha, then no one can hold the country down on his or her own terms. Never!

In 6 weeks Nigerians will know if a tyrant is born. They will know if the military will be in charge to complete the February 7 coup.

The roles of the civil society as well as the formidability of the opposition parties may determine the fate of a tyrant in the making.

If caution is thrown to the winds, all the predictions about the disintegration of Nigeria in 2015 may come to pass and history may record Jonathan as the last ruler of a unitary Nigeria. Time will tell..!