In 1996 before the end of my service year I met an elderly man in a village near Moniya, on the outskirts of Ibadan. I think the village is called Idi Ose or something like that. Some of my colleagues at that time had been going to that village before I arrived in Oyo State for my service year.

The village provided solitude, a sort of respite from the stress of the work we do as Nigerians at IITA. I think my colleagues really wanted to have a place where they can have peace from work and sip original palm wine or just relax in the shade when they have long breaks or at the close of work before heading home. There is always peace when you are close to nature.

The elderly man, a very good reason to follow on the short trips to the other side of the road, was a very good listener and he chose his words with wisdom when he spoke. On one particular day he revealed his vexations, his bitterness about the criminals and greedy people called politicians who loot or steal from the treasuries across Nigeria. His greatest disappointment was that the crazy politicians do not need so much money for a single, short life time. For most of us we will not live up to 36 500 days!

He must be in his 70’s then and he told us that he had counted the probable days left of his life. He made an example and said if he had just N1m, that it would be more than enough for him to live a good life for the rest of his days. So, he questioned the excessive looting by Nigerian politicians and public office holders. He could neither comprehend, nor understand the rational behind looting of several billions of naira or dollars by individuals.

It was from this elderly man that I first heard that having cars do not depict prosperity. It’s hard to admit such a line of reasoning in Nigeria and I understood it more in Europe where people leave their cars at home and enjoy bicycle rides to work and parks.

How much money does a man need actually?

The answers cannot be that easy and the question cannot be treated in isolation. It can also not be generalised.

The amount of money a man needs today will depend greatly on the country that he lives in. Even within a single country the amount will also vary locally or regionally.

But what a non-greedy “universal” man needs can be used a yardstick, sort of standard.

At every point in time, a man needs access to shelter. He needs food, water and above all a good state of health to enjoy the previously stated necessities of life.

But how does one define a universal man? Is he/she single, married or divorce? Does he or she have children? What kind of roles does the society play in the care of the underprivileged, the unemployed, the old, the ill and other categories of the people who one can classify as either dependents or weak?

In what ways can one connect the universal man to the others in the same society? This question is very relevant for countries like Nigeria because of the overwhelming abnormalities that obtain in how the society runs. It’s a totally dysfunctional society where bad politics and stupid policies have ruined the essential foundations of family, society and country.

A universal man who has come of age wants to have a job or do something in order to earn a dignified living or existence. At every point in time, he can live in one house or in an apartment. At every point in time, he can drive one car or ride a bicycle. He can only sleep on a bed. These things and all the other things that a man desires can be naturally influenced by taste and normal affluence.

However those who loot Nigeria’s treasuries do not understand that happiness comes from the perfect integration of work and play. They do not comprehend that happiness is also based on sound health, contentment with family, mutual coexistence with other people and peace with nature and environment. 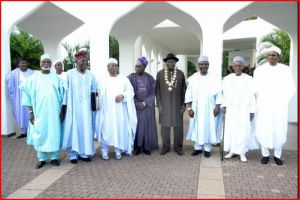 [Abdulsalami, Shonekan, Babangida, Obasanjo, Jonathan, Gowon, Shagari and Buhari. Under these men, their executive councils, their ministers, several state governors and other accomplices that sometimes include their wives, Nigeria has lost over 600 billion dollars. They should be made accountable. Nigeria needs to make examples of the rule of law for real, and the “heads” are usually where to start so that other parts can straighten out. Never is it too late!]

Greed is the creator of insatiateness. When people working in public positions, Nigerian politicians in this case, start to think that they can build a perfect life based on the amount of money they steal or accumulate, then there is a tendency to open up a bogus life instead, that which is based on falsehood, criminalities and perpetual illusions that money is the sole basis of happiness or solution to life’s puzzle.

This is where Nigerian politicians are today. They found an evil haven in the nature of the crazy politics and ways of life that emerged in post-independence Nigeria. They created a buffer called the immunity clause that allows them to live as criminals in government and eventually they remain free criminals shielded from prosecution even after days of political plundering.

They found morally bad refuge in the useless law system that they helped to manipulate and rendered ineffective. Nigerian politicians who are well known criminals have rarely ended up in jails. Nigerians as a people are totally disorganised and weakened by ethnicity and religiosity amongst other factors that promote mental slavery. They back their own “local political criminals” or they simply adopt the “siddon look” approach. What a tragic sequence!

Does a man need up to 12 billion dollars in his life time? Why would a man steal so much money under the pretence of political service? Such crimes are previously thoughts to be reserved for the social misfits, career smugglers and armed bandits until it became the official pastime of public office holders in Nigeria.

What kind of satisfaction comes from buying properties that belong to the government and the people under the pretence of governance? Why do Nigerian politicians engage in looting competitions to acquire massive wealth that they cannot exhaust if they were to live their lives 100 times over?

Are these acquisitions growing signs of undetected mental ailments among Nigerian politicians? How much money does a man need? Leo Tolstoy made us understand how much land a man need. It’s just 6 feet.

The minimum federal wage in Nigeria is N18 000 per month. This poverty wage is so low and shameful it can only buy 3 standard meals at an average modern eatery in Nigeria. How does a man who earn N18 000 per month survives from one month to the next? Understanding this type of a question can help us arrive at what an average man needs to survive in Nigeria. It will illuminate the things Nigerians do in order to survive.

How much money does a man need? Is family a reason to become a thief in politics? How did Nigerians end up employing or selecting criminals as politicians all round and then end up doing nothing to rectify the anomaly?

When a man starts his own family, how much money does he need? How does he plan his household so that his usual income can cater for the need of his wife and children? What are the modern roles of women in Nigerian homes so that a family is able to maintain an economic stability that will keep them away from crime or criminal tendencies? I know that women are breadwinners in many homes anyway.

Nigeria is paying her legislators the highest salaries in the world. Yet they receive unlimited bonuses, have access to contracts, and enjoy lazy times at the sittings. 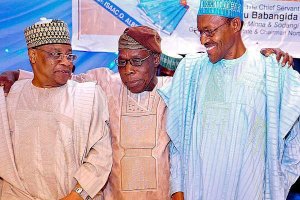 In general Nigerian politicians earn a lot and steal a lot. A whooping 600 billion dollars may have been stolen from the Nigerian treasury in the past 50 years. About 200 billion dollars of these wasted monies have allegedly disappeared since the return of civilian rule in 1999.

What these looted or wasted monies could have translated into is immeasurable. But with simple logic, it is easy to assume that Nigeria is supposed to be the best country to live on earth. I mean who throws away 600 billion dollars? It’s insane!

The consequences include but are not limited to making Nigeria probably the most corrupt country in the world, one of the worst places to live on planet earth and a place where life expectancy is declining fast.

Nigerian politicians and former military dictators should be made to undergo extensive psychological evaluations so Nigerians can know what is going on in their heads. Answers may be needed for the sake of posterity. Nigeria may take the help of renowned anthropologists to do extensive studies on the mindsets of her politicians.

I’m serious to repeat that this is very important and necessary because Nigerian politicians are definitely not normal people. Their abnormalities are promoted by the absence of functional legal systems that ought to put away political criminals in prisons. It is also promoted by the absence of virtues that define sane societies for example Nigerians do not question the sources of wealth, they simply worship it. In the presence of money, majority of Nigerians simply lose their moral consciousness.

It’s amazing how Nigerians have been enveloped by both the Stockholm and the Nigerian syndromes. These untoward attributes make up (the) almost irreversible tragedies that plague Nigeria as it is today.

How much money does a man need for a life span that is less than 100 years (36 500 days)? I don’t think these retards count their life span in days just to see how short life is!

How long are Nigerians going to look on or away before they realise that their future had been stolen and that recovery lies entirely in their hands. The system of government is rubbish. We are just reading about a probable scenario where Goodluck Jonathan may have kept several millions of naira in Aso rock. Is Aso rock a bank or bureau de change? This type of trend is common in Nigeria but it is totally abnormal and crazy.

In every part of Nigeria, people need to organize sensible resistance and find ways to end the reign of the bad rulers and corrupt politicians. The people need to regain their consciousness and take back their regions in (to) normalcy. It’s going to be a very long walk to freedom.

It is known that all days can be for the thief. But no matter how long it takes one day must definitely be for the owner. With the nonsense immunity clause in Nigeria that protect criminals in government and the invalid status of the rule of law that fails to catch up with them, one day it will be time for the people to round up all the corrupt politicians and military dictators and tell them that enough is enough!

That’s part of the hope and probably one of the ways forward as well.

One thought on “How Much Money Does A Man Need?”