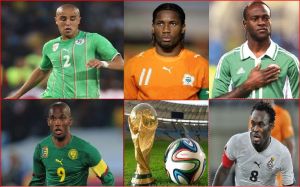 Nigeria, Ivory Coast, Algeria, Cameroon and Ghana will fly Africa’s flags at the world cup which starts on the 12th of June in Brazil.

Egypt went to the world cup in Italy in 1934. That was the first time an African country featured at the championship which started in 1930 in Uruguay. Since then 13 countries in total from Africa have participated at various editions of the mundial. The other 12 countries are Morocco, Zaire, Tunisia, Algeria, Cameroon, Nigeria, South Africa, Senegal, Angola, Ivory Coast, Ghana and Togo.

When Africa’s representatives at the world cup for 2014 arrive in Brazil this summer they will be chasing an unfulfilled dream-that an African country is ripe enough to win the world cup.

To make this dream come true, Cameroon will have to cross the hurdles in Group A where they will do battle with the host Brazil, Croatia and Mexico.

Cameroonians are playing in their 7th world cup. This is an African record. But what has Cameroon got to show for previous appearances? The best exploits came in Italy in 1990 as the career of Roger Milla was winding up. Cameroon was beaten in the quarter finals by England. After Italian 90, Cameroon quickly transformed and became “not indomitable”. For an African country to win the world cup, consistency must be shown.

Ivory Coast is a country also in need of consistency and even more, delivery. This country must emerge from Group C that include Colombia, Greece and Japan.

The men representing Ivory Coast and led by Didier Drogba are the popular golden generation that has won nothing to show for the name tag-“golden”.

This is the third straight world cup for the so called golden generation. They failed to emerge from the groups in 2006 and 2010. Any country that wants to win the world cup must be able to emerge first from the group. It will not matter if the group is mildly classified or if it is termed the group of death.

One country that shaped the organisation of FIFA’s world cup after the 1982 edition was Algeria. In 1982 Germany and Austria “sold” their last game “to each other” so that Algeria could be eliminated. You need to find and read that story if you love the history and football. In 1982, the Germans and the Austrians brought huge shame to football.

Football scandals or match fixers are not restricted to Asia or any particular geographical part of the world. Rather it is something that has been a part of football at every level and in almost every country for as long as the game has been in existence. The roles of FIFA officials in recent reports seriously brought the game into disrepute, again. Yet, this is a game people love no matter the problems related to scandal or “arranged outcomes”.

After the 1982 games, FIFA decided that the last games in each group will be played simultaneously. Algeria will try to emerge this time from a group including Belgium, Russia and South Korea. If they find the form again like they did in 1982, they have a chance of making Africa’s dream come true.

To put Africa’s name on the map as a world cup winning continent can also become a dream come true through the hands of the Ghanaians. Ghana is also making a third straight appearance.

In 2010 on the African continent Ghana reached the quarter final stage where they fell to Uruguay. That match will not be forgotten easily in the stories of FIFA senior world cup.

Luis Suarez had to become a “goalkeeper” at some stage to save the ball from going into the net. It was a sad day for Africa as Ghana failed to convert the extra time spot kick that would have sent them to the semi-final stage. Our dear brothers lost on penalties.

This year in Brazil, Ghana must scale Germany (the match-fixers of 1982), Portugal and the United States in order to prove that African countries can show consistency and make serious claims to world cup glory at the senior level.

African champions Nigeria will also be making another attempt to show the world that an African country is indeed prepared to win the world cup. Nigeria must emerge first from a group that includes familiar foe-Argentina, Bosnia-Hercegovina and Iran.

This is the second time Nigeria is going to the world cup on the back of a Nation’s Cup victory. The first time was in 1994 when Keshi was the captain of the team and Clemence Westerhof, the coach.

In 2002, Nigeria had a disgraceful participation in Korea/Japan. In 2006, Nigeria was missing at the German edition. Back in South Africa in 2010, Nigeria failed again to emerge from the groups.

Through the years, bad planning, maladministration and useless preparations have ensured that Nigeria just added to the numbers of the countries going to the world cup.

To date, especially since the Algerian exploits of 1982 and the Cameroonian efforts of 1990, the performances of African countries since 1934 (though sporadically filled with some other brilliant moments) have not matched the expectations of the people of Africa.

Brazilian legend Pele predicted that an African country will win the world cup at the turn of the last century. It did not happen. Even at the time that the profiles of African players rose both on the continent and abroad, it has been impossible for Africa to deliver on high promises.

In South Africa when Ghana crumbled, Africa returned to square one of the struggle to win the world cup.

The organisation of football on the African continent needs a range of face-lifting processes. In North Africa, it appears that the organisation has always been solid. There were a lot of set backs in some North African countries as a result of the Arab spring. But some countries (like Algeria) are reported to be making big strides even attracting players from France to the Algerian league. One hopes that Egypt will rise again.

If Algeria makes progress in Brazil or if her football becomes a reference point irrespective of how they end this tournament, fingers will point at the growth or promises shown at the domestic league.

Among the other African countries representing Africa at the forth coming mundial, Nigeria will be of concern to Nigerians, definitely. Since the first appearance of the country at the world stage in 1994, it has been a permanent impossibility to uplift the game on Nigerian soils.

Nigeria as country or Nigeria comprising of several regions has a population that could turn anything profitable into a goldmine. Sadly like many other things that Nigerians have failed at, including governance itself, football in Nigeria has not been revived since its collapse I would say in the mid 1980s. I may be wrong with the actual date but I remembered how it was fun to watch Leventis United, and Abiola Babes when I was in early secondary school.

Today the English Premier League, the European Champions league and other foreign leagues are very famous in Nigeria with huge followership. The gains that Nigeria should be making in marketing of her own football is totally diminished or drowned.

For one month between June and July 2014, Nigerians will expect the boys that will be selected by coach Keshi to deliver. Many of these boys are plying their trades abroad. Invariably they have been polished by other systems. The exposure is brilliant but when the days and years are running out, many of these boys cannot return home to wrap up their careers like the Brazilians or the Argentines do.

They do not have to finish their careers on the Nigerian soil but the argument is that the level of football in Nigeria in terms of planning, organisation, administration, execution and overall sustenance is not yet in the right hands. Nigerians know these things but for them everything is politics.

As long as there are functional leagues abroad (even in neighbouring African countries like Benin and Togo) where Nigeria’s talents can be nurtured or even de-processed by making them change their roles on the pitch, it is fine with those in the glass house and their pickers in Abuja.

The biggest indicator of the gigantic problems facing Nigeria’s football is the failure of Nigeria since 1985 to transform the glory of the young players (Eaglets especially) into something that the world can emulate at the Super Eagles level.

For an African country to win the world cup will not depend of luck or unexpected favours from some quarters. It will depend a lot on management of the game on the continent. That’s where CAF comes in. This body needs revamping and dynamism. It needs a new life.

The progress of African football will also depend on national organisations like NFF of Nigeria. What are they doing to promote the game in all spheres (on the pitch and off it)? Are there serious plans to encourage more youth, more women and anybody interested in the game to pursue their careers knowing that they have a foundation to rely upon?

Africans must also overcome the mental incapacitation that FIFA rankings can infuse on the mind. The best place to play football is on the pitch. Moments like this-in Brazil provide the opportunity to send the FIFA ratings to the dustbin. Football is dynamic and it moves from one game plan to the next.

The future of African football, its organisation and management on the African soil will play significant roles and the world will see these upliftments when an African country eventually wins the world cup. It’s been a long wait but it must happen in the future. July 2014 is part of the future.