One of the saddest things to occur in Nigeria in the last 4 years is the ascension and domination of religious politics. Unfortunately, it has also been the time of putting Nigeria on the map permanently as one of the major terrorists’ countries in the world.

Nigerian politicians have lost the plot a long time ago in the areas of ideologies and functional manifestos. It will amount to overstating the obvious that Nigerian politics runs on faulty foundations and that the essential purpose of politics in Nigeria is nothing close to service. The politics is rather self-serving, self-rewarding, dominated largely by criminal minds and stinking of massive corruption from the head to the toes.

As Nigeria and Nigerians now approach the 2015 elections, the stage is now set for a religion-influenced electioneering. How did Nigeria get to this point? The question is relevant judging from the background and outcomes of the 1993 general and presidential elections. That election was adjudged to be the best election (ever) conducted in Nigeria.

Sadly for the Nigerian nation the presidential election results were annulled by the tropical military gangsters headed by one dictator called Ibrahim Babangida. That election would have ushered in MKO Abiola and Baba Gana Kingibe of the SDP, two Muslims from two different geopolitical zones in Nigeria.

When Mr. Goodluck Jonathan started his reign as the ruler of Nigeria in 2011, it was not pleasing to the Nigerian opposition party and a lot of statements were made by the opposition politicians especially those from the Northern parts of the country. Gen. Buhari and Mr. Atiku were alleged to have made statements that ordinarily would have earned them interrogations by the Nigerian special security forces. But they were not invited for any interrogation or explanations.

There had always been elements of terror and its tendencies in Northern Nigeria. There was of course serious problems with the terrors in the Niger Delta that curiously to this day continue to gulp more money than the federal defence budget of Nigeria. However for some reasons that have now kept the blame game in a roller coaster mode the terrorist group popularly known as Boko Haram have flourished in the northern parts of Nigeria and Abuja under the reign of Goodluck Jonathan.

This period of rise of terror curiously also coincided with the era when Mr. Jonathan embraced the Christian community in Nigeria with more enthusiasm. He even went on the so called “holy” pilgrimage with a large entourage, all on Nigeria’s tax payers’ money.

By the way the annual holy pilgrimages to Mecca and Jerusalem are embodiments of the nonsensical waste in Nigeria’s government since time immemorial. Nigeria is a very corrupt country (we don’t need corrupt Mugabe’s opinion to confirm this fact) and the wastage or looting of money through religious tourism to other countries is regrettable. These pilgrimages are parts of the inferior complexity of Africans, also regrettable, made famous by the government and people of Nigeria.

The APC is yet to state with audacity the two persons who will be flying the flag or the brooms of the part in the 2015 elections. An attempt to draw a ticket on 2 individuals with the same religion like the SDP did in 1993 is becoming unlikely and like their party members and critics would make everybody believe-suicidal.

The disorganised polity has been heated and whether the Muslim community or the APC in Nigeria find it desirable or not, there is no longer a general acceptance for the type of scenario that Nigeria had with the Abiola-Kingibe ticket. Since the political scene is devoid of common sense and ideologies, the rise of Boko Haram has given many religious people within and outside APC the platform for hatred. Offshoots of the hatred are the emergence of the political suicide syndrome and the probable intense Christianisation of the Nigerian presidency under Jonathan.

The alleged statements made by the likes of Buhari and Atiku at a time when they needed to control their emotions but lost it completely, and the silence/lack of condemnation from the Northern region in general following the “successful” campaign of Boko Haram continue to send shocking and conflicting signals across Nigeria. It will be hard to erase the meaning and aftermath of what it takes to make Nigeria ungovernable. Such expressions now run parallel with terror occurrences.

The government of the day in Nigeria has made many remarks in the past and even recently linking the deadly terrorist group to the main opposition party-the APC. Nigerians are surprised because such allegations are supposed to be supported by investigation and arrest. Nothing has happened in that line. Before he was killed General Azazi linked the problem to religion, poverty, the desire to rule Nigeria and a combination of everything that is wrong with Nigeria. He especially laid the blame at what he called politics of exclusion of the PDP in the region.

When the true story of Boko Haram is finally told, it would be instructional, not least sensational to know the sponsors (national or international) and the roles of the Nigerian military that is alleged to be harbouring snitches who have made the bloody operations of Boko Haram successful. What will also be useful if Nigeria or the nations within Nigeria will ever learn anything from history is the magnitude of the alleged involvement of the Northern rulers.

I doubt if I know what to believe going by the nature of the roller coaster blame game. The Yorubas have said it all “if falsehood persist for 20 years (or even 100 years as Nigeria marks centenary of a painful marriage), one day the truth will emerge. 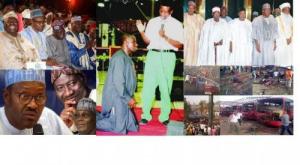 Meanwhile in the faces of the multitudes of speculations, allegations and counter allegations and irrespective of where the actual truth lies, it is extremely sad that those who have suffered the most are the innocent masses going about their occupations or daily activities. Women and children have suffered in this evil campaign and crimes have been committed against humanity.

It appears that the government of Nigeria enjoys playing or toying with the lives of the citizens. This whole pandemonium is like a chess game where the opponents are seeking checkmate. In this case, the 2015 election is the end result. The “I don’t give a damn attitude”, the lies of keeping government “working” and the campaign dance that took place in Kano barely 24 hours after the deadly car park blast in Abuja that claimed, depending on sources, between 150 and 250 lives are all indications of a failed government.

Religion in its ordinary form mixed with politics is poisonous. The effect of contaminations with radical views either from the presidency or any other place in Nigeria will be more potent than a poison. Nigeria appears to be in a labyrinth, more likely at the crossroad of self-destruction.

In January 2011 I wrote an article titled: My Message To Nigerians In 2011, Stop Saying It’s God. I condemned the influence of religion in Nigeria’s politics and social life.

Nigerians have been fooled, deceived and slaughtered at the altar of ordinary and radical religions. It does not seem there is an end in sight if one judges by the religiosity of Nigerians on the social media and in reality while the country burns.

Nigerians and their politicians attribute events (good and evil) to acts of God and they merged together to pray for things that can be solved by simple action and will.

In the area of religion and prayers, I have not understood the Nigerian mentality. They pray for the things that they and the government are supposed to do. So after creating a corrupt political system where corruption and crimes are tolerated and rewarded, Nigerians will then commit everything into the hands of their various Gods. Nonsense and ingredients!

For Nigeria, religion has created more problems than solutions. It remains a deadly veil for both Christians and Muslims. It’s worse for radicals anywhere because the effects of brainswashing are profound on them and their narrow minds. It’s going to be mission impossible to forbid religions in public positions, in politics especially. Ironically the elimination of religion in our doings is supposed to be the best way to free our minds and promote coexistence.

It’s hard to “converge” my views but I’m trying to get to a point where I need to condemn the role of politics and religion in the rise of terrorism in Nigeria. I am of the opinion that religious differences have aggravated the political differences in Nigeria. I think that the corrupt rulers and politicians have through their actions, alignments, attitudes and utterances contributed to the hopeless situation in Nigeria.

I have a problem in understanding the rise of Boko Haram acting on the radical angle of one of Nigeria’s dominating religion, that is Islam. A few years ago, Nigerians boasted of their “fear” of dying. Today we are told there are suicide bombers in Nigeria. It’s very painful to watch terror achieve successes on the back of religious platforms. I’ve been blown away many times in my life seeing atrocities committed in the name of Christ, God and Allah.

I also want to emphasise that as long as religion remains a factor in Nigeria’s politics and socio-economic life, then the country is going no where. In the society, people need to start doing things independent of religion. Just be good, do the right thing and play your role in nation building!

The Nigerian political class does not build or propagate sane and sound ideologies; they are instead wiggling from one political party to another based on the religion of the political candidates, based on fairweatherism and opportunism. That is the height of stupidity, having no principles.

The call for true federalism or the emergence of regional governments cannot be swept under the rugs. For, right now, Nigeria is in a serious dilemma and the center is too weak to hold things together. The center is marrying, making merry and dancing around as the country burns and people perish daily.

The weakness of the center is the strength of Boko Haram, it is the strength of militancy or terrorism anywhere in Nigeria. The weakness of the center is the sustenance of a corrupt political system. The self-serving nature of Nigerian politics means that the non-thinking politicians and rulers are ready to take everything down with them. It is up to Nigerians to rise up above religion, above sentiments, above hypocrisy and above political and ethnic differences.

Great countries were not built on religions, corruption, selfishness, greed, prayers or miracles. They were built by dedicated people, on sound political structures, on performances, on ideologies that stood the test of time, on positive actions and on the collective will to succeed.

One thought on “Terror And The Volatile Mix Of Blind Faiths”