The Re-education Of The African

I have no doubts that we need to educate and re-educate Africans. My blog is not a source of historical facts, but I can reflect on what has been and I have a right to write based on my observations and inspirations.

There is no doubt that we have challenges in Africa. We do.

Sometimes I wish I could go out and preach, not as a lazy religious leader ripping the people of their hard earned monies, but as a preacherman asking the people to look deep into their souls and search within for the meaning of their lives and the significance of their existence in relation to their immediate habitat and in a global context.

In matters of African policy and politics, the intellectuals have been relegated and rendered insignificant. They have been pushed to the background, relegated and made voiceless.

Why do we need to educate and re-educate Africans?

We have lost touch with our culture.

We don’t speak our languages.

We don’t write in our languages. I am Yoruba and have not written Yoruba in several decades. I don’t know how to put marks on Yoruba letters. I am guilty. I need education

We need to teach us our culture and languages.

We need to go back to our civilization. It was modern and progressive.

We need to find out why we lost the mind games that brought slavery and colonization to our lands. We shall not make the same mistakes now or in the future.

We need to wear our natural hairs and natural looks.

We need to write our own books and read them along with others. But ours must be the priority.

We need to educate ourselves and our children on the need to work together and build together.

We need the education and the re-education that will bring us glory.

Our stories and our existence go far beyond the origin of the Bible and Koran.

We owe it to ourselves to find out what went wrong.

We must with haste, re-educate everyone.

My generation may not achieve so much, but these things we write will help us and those coming after us to know that AFRICAN is the NUCLEUS of the world.

We need education and re-education.

This short essay does not say it all. I just wanted to wake you up. You’ve been sleeping since you were born.

Wake up and start your own re-education.

I hardly meddle in religion but this one got me.

I can’t believe what l just heard and saw.

How can we set Nigerians free from SLAVERY?

Those who ruined Nigeria will not find rest. They will not have peace of mind. Religion will not be their opium or succour.

An Invitation To Ile-Ife 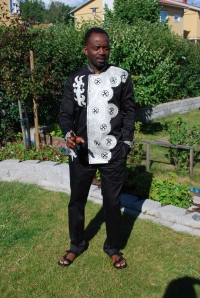 The rulers of Nigerians should be called to order. They have to stop visiting the Middle East for religion tourism. It is an act that promotes mental slavery.

How did a secular country turn out wasting (stolen) monies and tax payers’ monies on worship modes that do not benefit the citizens of Nigeria?

The regular (and frequent) trips to Saudi Arabia and Israel by goverment officials and individuals who are sponsored by public funds need to be condemned and brought to an end.

Even the churches and mosques built in and around government offices need to be demolished.

Government houses are places to serve the people and plan for a better society, not a place to hypocritically show off religion while looting the treasury and committing crimes against humanity at the same time.

Nigeria is facing both political and religious crises. The systematic removal of religion in public offices is a necessary recipe for stability.

Religion may have been playing a major role but it has not helped Nigeria. Therefore there is a need to play down religion.

What is the limit of hypocrisy?

No matter how long it has been a ”norm” at some point one needs to tell a mumu that there is a limit to stupidity. Ignorance is no longer tenable as an excuse in this Age.

While Nigerians are at it-fiddling with religion-at the expense of service to humanity, let me advertise Ile-Ife to Netanyahu and Bin-Abd-al-Aziz.

This is their invitation to one of Africa’s cradles of civilization-Ile-Ife.

I will like to tell them that Oduduwa created the solid parts of the earth for humans to walk upon. It will be my pleasure to inform Netanyahu and Bin-Abd that Obatala created humans and that makes one of my fore-fathers the first artist of all time.

It will be with great satisfaction for me to inform these leaders from the Middle East about Orunmila, the first test-runner of all time. He lived in the world for several years when the world was without form.

Orunmila returned to Olodumare and then came back to earth again after the creation of the solid places. With his vast experiences of the world without and with form he became the first educator.

Orunmila taught our fathers to inform us about orin inu and iwapẹlẹ.

He gave us irúnmọlẹ̀ to take message between the physical and the uneseen worlds.

He taught us about Ajobi.

Orunmila knew that humans would always need divine help and interventions. So he left the Ifa oracle to deal with everything about life.

Orunmila founded Ifa on the principles of Odu Ifa. He gave human 256 pieces of Odu Ifa which give explanations to all the situations in life. He taught a few men the secrets and called them the custodians of the Ifa oracle.

Orunmila finally left Ile-Ile hoping that the humans will apply the oracle in solving all the problems of the world.

Dear Netanyahu and Bin-Abd it has taken several centuries and several manoeuvres to undermine the Odu Ifa. But it is now obvious that the binary codes (Odu Ifa) of Orunmila are the keys to many of the technological advancements of the human race, also evident in Israel and Saudi Arabia.

I want to invite you to the land of the people to whom the knowledge of the Ifa oracle was given.

Sadly, the people to whom the knowledge was given have gone astray. They lost the plot.

In the Yoruba belief it may interest you to know about Esu the messenger and God of luck.

Esu brought luck to the Middle East using the denial and selfishness of the Nigerian rulers and the disoriented people as a leap. Esu is not the devil. Rather he is the wise God who makes one man’s meat to become another man’s poison.

I will not forget Sango the God of thunder. He continues to make the rain that keeps the Mediterranean fresh. You must thank him for that.

Among the other Gods, let me tell you about Yemoja, Oshun and Oya. The wives of Sango brought blessings and wellness to mankind. They make women beautiful around the world.

Let me reiterate our common belief that our supplications as humans are transformed through faith and not by location. Still l want you to come to the place where the Gods once lived with humans in Yorubaland.

The Yoruba faith taught about Olorun who is also called Olodumare. He created the physical world-Ayé– for us to have and to keep.

Netanyahu and Bin-Abd, you must be really shocked about the low cognitivity of the Nigerian rulers visiting your abodes like rats looking for food in the dark of the nights. This is partly because Ifa is one of the several ways known in Nigeria as means of communication and interaction with the unseen, spiritual world in order to seek solutions to problems.

Ifa is about divination. Ifa tells about the past, the present and the future. Come to Ile-Ife and see!

I want to tell you that it is pure wastage (perhaps a stupid act too) especially when Nigerian rulers continue to drain billions of dollars of tax payers monies and looted funds to pay homages and worship in your countries.

It can’t be your problem if they decided to enrich your lands through religion tourism. I know.

But they can do such things as private citizens because they have a right to buy the religion of their choices.

What is sad about their actions is that they are mostly criminals seeking refuge where there is none.

To ignore what you have in your domain and to seek similar things at the house of another man is self-pity and an almost incurable form of inferiority complex.

I am concerned about why Nigerian rulers are consulting oracles in Israel and Saudi Arabia when they can consult oracles in Ile-Ife.

Orunmila who is the assistant of Olodumare gave powers to the Ifa oracle and instructed his disciples to take care of the human race. He must be shaking his head now.

Who will save Nigerian rulers from their stupid annual visit to the Middle East?

Who will tell them again that iwapele and orin inu are some of the remedies to the nonsense they are parading as governance?

Who will tell them that Ajobi will never give them rest because of their betrayals and criminal activities?

Those who ruined Nigeria will not find rest. They will not have peace of mind. Religion will not be their opium or succour.

Indeed, all religions admit that we are surrounded by unseen forces. They may differ in how we come in contact with the messages from these forces that include Olodumare and other immortals including some of our forefathers.

Why did Nigerians in their respective regions and nations give away the beliefs that they got from their forefathers?

Who knows how evil rose and triumphed among them?

Why did Nigeria not end slave religions when slave trade ended? When will mental slavery of Nigerian rulers end?

If the Yorubas in South America continue to speak the yoruba language and practise the yoruba faith, what excuse do we have in Nigeria or the Yoruba country?

There are so many things we learnt from our parents and forefathers that are supposed to speak to us about how to lead or govern when we have the opportunities.

Dear Netanyahu and Bin-Abd, we have our beliefs in Nigeria and they are not inferior to what you believe in Israel and Saudi Arabia.

When you have learnt about the Ifa belief (including the binary codes of Odu Ifa) and understand how it directly and indirectly contributed to the development of your countries in construction, manufacturing and other areas of advancements, maybe you will have the moral consciousness to chase away Nigerian rulers and stop them from polluting your lands.

That moral consciousness will not be an obligation.

Afterall Esu appears to humans in different ways bringing diverse messages.  It is our lack of understanding and misintepretation of his messages that ruined humanity.