Buhari, The Present Father Of Corruption 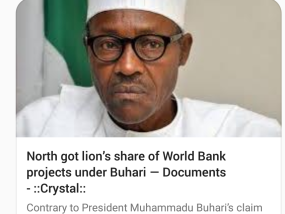 Mr Buhari has taken nepotism and tribalism to the greatest level seen anywhere in the world.

By Adeola Aderounmu
In recent days  lot of uproars have trailed the APC-Buhari mandate which started in 2015, that is a little more than 2 years ago.

Whilst not taking credit as a seer, l remembered how people attacked some of us who pointed out early that the APC regime very early in its mandate showed traces that made it obvious that the status-quo was going to be maintained.

Mr. Buhari spent several months trying to put up a government. In the end he had no choice but to settle for the same old criminals that have served in various capacities under previous regimes.

It must not be forgotten that some politicians paid huge sums to sponsor the campaign and the eventual emergence of Mr. Buhari. They were rewarded with positions in the cabinet.

What is more shocking to me as a writer and social critic is the way Nigerians are treating the Buhari-APC mandate. They are acting like the government is off the track.

Nigeria is running a system of government that will never bring criminals and looters to book. If a system cannot allow for the emergence of sane people and credible politicians, how can such a system be good?

Nigeria as l have written before is a country going no where. What you have seen since 1999 is pseudodemocracy and for as long as we continue to shy away from the truth and the way forward, this poverty, this hopelessness and this criminality in the presidency that percolates the entire strata of governance is what we will get. There are no miracles about government and prayers are the most useless options.

It’s all about actions, what you do and what you don’t do. That is government.

I am one of those who have lost count of how many scandals that have rocked the Buhari-APC mandate.  Now imagine the daily scandals of looting, stealing, nepotism, triablism and outright madness that have been exhibited by Nigerian politicians since 1999? Since 1960?

The other day it was Goodluck Jonathan who should be hiding in shame that even made bold to condemn APC as a government of lies and propaganda.

I had to assure you before you go ahead that the writer  is neither interested in the APC nor the PDP. Hence my brief reference to Jonathan in that sense.

There was a tactical criminal tendency in the PDP from 1999 to 2015. For every crime, for every lie, for every shame and for all acts of corruption, the PDP adopted what it called “family affair approach”. That way the people were deceived and their eyes taken away from the ball.

In this Buhari-APC era that has since shown, in my understanding, that it is a variant of the PDP is adopting the same approach. But the mechanism is modified.

For every crime, for every lie, for every shame and for all acts of corruption, the APC first play the fool, keeping silent and pretending like nothing happened. Then people are invited to Aso rock and the dirts are swept under the smelly carpet in Aso rock. Little wonder the rats are eating up things there. It is stinking!

The evil deeds of this government would have meant less if for example Buhari or any person that is responsible in the APC stops saying that it is fighting corruption.

Which corruption?
I don’t get it.

How can you live and thrive in corruption yet you say you are fighting it?

I have sat back a few months just to observe this government closer. It is full of pure evil.

It is reckless and careless at the same time. This APC-Buhari mandate has perfected the evil plot and rendered the populace both powerless and thoughtless.

From a distance l see a corrupt goverment where all the key actors are criminally minded just the same way it has been from 1999.

I see a repressive government that is military-styled.

Just like before and now a bit worse, the democratic organs are still useless.

The presidency, the senate, the state and the local councils all stinks of corruption to the clouds.

This particular government needs to stop saying that it is fighting corruption. Those running it are corrupt. The head is rotten therefore the entire fish is useless.

I don’t want to start mentioning cases like Maina and the others. It is up to each one of us to look carefully and see how Mr. Buhari had been quiet and acting a god.

If the Nigerian politicians and politics are not useless and worthless, Buhari would have been impeached a long time ago.

But those who are to impeach him are not worth it, they are the birds of the same feather. Which is why Nigeria is heading no where.

If you like, look at how the NNPC scandal has been whisked away. Maybe it will give you a better picture of how billions of dollars have disappeared again under Buhari. Just like in the late 1970s!!!  Bad history repeats itself often in Nigeria because the people have stopped thinking

There was never a war on corruption. If there was one, it was never by Mr. Buhari who has surrounded himself with people from Northern Nigeria in one Nigeria. What nonsense!

If there would be a war of corruption in Nigeria, then we first have to fill the political posts with righteous people and saints. Today, everybody is stealing and the one who is caught is the thief.

Which corruption are we fighting again? I am really annoyed now. Shut up everybody! There will never be a war on corruption. Just wait for it, Atiku is coming back! All the people who should be in prison are controlling the useless unitary system.

Nigeria is going no where.

By now the younG people need to think and reason. Is this how we want to go on? Is it not time to unite and take back Nigeria? Is it really true that we are all criminals waiting in the wings to capture Nigeria and milk it? I refuse to agree with that. Ther are no criminals in my family. I am not Saraki and I am not Buhari. I am not Amaechi and I am not Tinubu. I am not Atiku.