I have read several reports that indicate that the militarily weak Nigerian government has planned to grant amnesty to terrorists in Northern Nigeria. 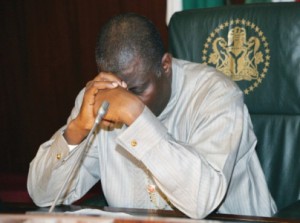 These reports are ridiculous and all but indicate a government that is clueless and useless.

There is a war going on in Northern Nigeria. This is no longer news. What is news it that both local and international media have lost tracks of the different battles and incidents.

Terrorism held fast in Northern Nigeria. It is also glaring that the war between the Nigerian military and the Boko Haram sect is now full force. About 200 people were reported killed in gunfire and arms battle this last weekend (week 16 of 2013).

According to reports in the PUNCH newspaper, 2,000 houses, 62 vehicles and 486 motorcycles were either burnt or vandalised during the clash in the early hours of Saturday.

Who declares amnesty in the middle of a war?

The terrorists have no plans to lay down their arms. They are on the rampage, killing, maiming and destroying both living and non-living things.
School days are over in Northern Nigeria because Boko Haram has ensured that several hundreds of schools have been razed.
Church days are over because Christians have been murdered in cold blood.

Life is gradually coming to an end in many parts of Borno under the control of Boko Haram. Government houses are been shut or sacked and police stations and prisons have been set open in many states to free criminals.

In the last year alone, more than 3 000 have died. For unreported incidents, we are talking about a toll that may hit 10 ooo in a country where records and statistics are scanty.

Boko Haram remains a mystery to the Nigerian presidency that described the sect as being constituted of ghosts.

So who needs amnesty?

Boko Haram is determined to end the regime of Goodluck Jonathan and I thought the message and actions are clear.

What is the amnesty about?

The weak central government of Nigeria is definitely misusing the word amnesty.

The government is planning a re-election in 2015 in a country that lies in ruins. You won’t find a crazier selection of politicians anywhere in the world. Nigerian politicians are crooks and blood suckers.

I think it is better to say that the government of Jonathan is channeling some free funds into private pockets by using the word amnesty.

Boko Haram is on the rampage. The sect has not denounced its objectives which include a violent overthrow of the corrupt and stupid Nigerian government. The sect also wants to institute Islamic codes and forms of government across Nigeria. The ambition is huge but has been largely successful in Northern Nigeria where Mr. Obasanjo provided the catalysm of aiding the establishment the Sharia governments across the North.
Amnesty is given to a people who have denounced their cause, become repentant and involved in negotiations to restore peace, order and the rule of law.

Book Haram fighters never told anyone that they wanted amnesty or that they have abandoned their causes.

As far as I am concern, Mr. Goodluck Jonathan becomes a sponsor of Terrorism when he starts to send funds and money to those pursuing terror acts whether in Nigeria or anywhere else. When the amnesty package starts to roll out, I will call for the arrest and prosecution of Jonathan for sponsoring terrorism.

My hope is that Mr Jonathan should be placed on a “most wanted list” for sponsoring terrorism when he starts to openly channel funds to the terrorists of Northern Nigeria.

Is Mr. Jonathan trying to openly support terrorism through his stupid amnesty plan?
Nigerians should wake up and smell the coffee. The ultimate goal is not to end the siege of Boko Haram. It will be to start a revolution that will change the course of history. The goals should include

• abrupt end to poverty in a country full of all known sorts of human, physical and natural resources,
• establishment of self-determinations in the various regions with control over own resources thereby abolishing the useless central system of government
• the struggle towards achieving a lasting peace and prosperity to all people and not the few selected idiots currently draining the country.