The Lagos State Government has finally sent one of its building contractors Access-1 Energy and Trading Company to start re-construction work at Festac Grammar School. 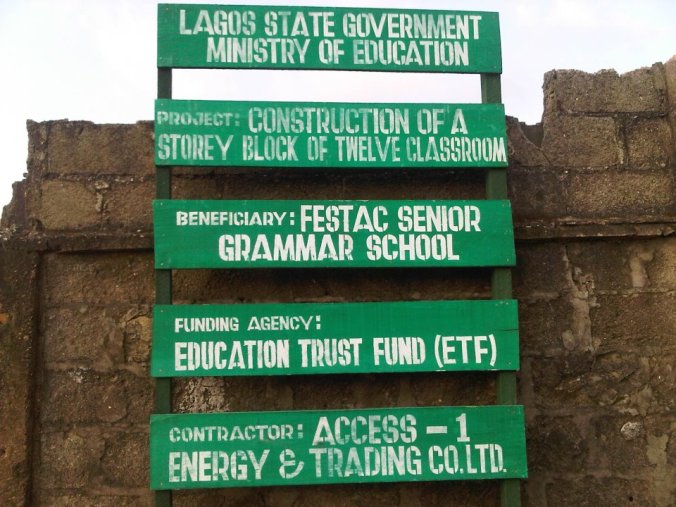 For those who have not been following the story. Here are links to the story so far:

In April when this struggle started I had written that one of the greatest mysteries of Lagos State Ministry of Education is how a school that got the first prototype one storey-structure in the old Ojo Local Government was left to rot away totally as a predominantly poultry school. It seems that the government of Governor Fashola, in a reaction to the series of stories about the embarrassing situations at FGS, is set to repair, renovate and re-construct FGS.

Now that hope has come, I feel obliged to write this story about the presence of Governor Fashola in Festac Grammar School through Acces-1 Energy Trading Company.

I have not received the details of the contract; therefore I am not in a position to describe the extent of the work that will be done.

However I do know the old storey building that was built in 1985 has now been given some re-touching in terms of structural maintenance.

One of the dilapidated poultry block of classrooms has been pulled down completely to pave way for a new storey building of 12 classrooms. 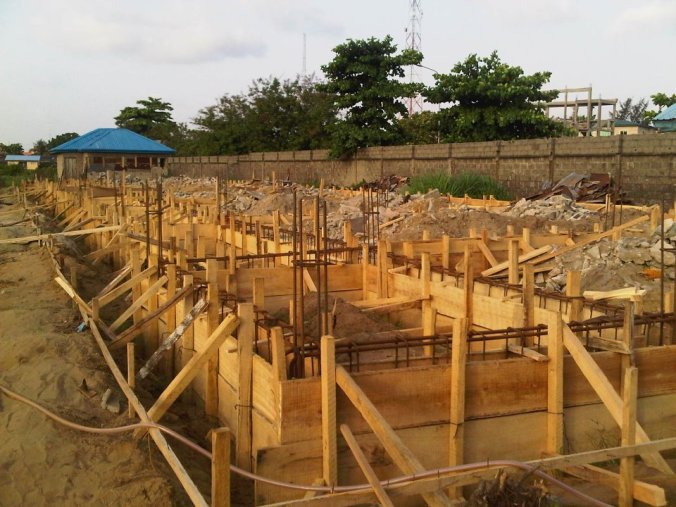 Foundation of Storey Building of 12 Classrooms

These developments are in the positive directions. They are in line with one of the long-term objectives of the Alumni Association to ensure that the school poultry structures built by Lateef Jakande are overhauled and replaced by modern storey buildings.

This objective should never be different from the functions of the Lagos State Ministry of Education. How schools are allowed to rotten remain inexplicable and if we tie it to the systemic corruption in the Nigeria system then it is an indication of what I feared most: that the future of the unborn generations remain stolen.

Whichever way, it gladdens the heart and it brings a sense of fulfillment to witness the re-construction work at FGS. Without any doubt I am convinced that it was a rapid response to our calls that have been made on the NVS and some of our blogs.

The Lagos State Government has shown that we do not need to know anyone in the corridors at Alausa in Ikeja before our agitations can be attended to. What the LASG must also ensure is that it carries out its functions without allowing us to carry the burdens to the web space all the time.

On our part as members of the Alumni Group we have made progresses. We have donated some equipment to the school and we have helped them to settle electricity bills. We have more plans.

In terms of our organization we are now duly registered and our activities are governed by a written constitution. We are in the process of electing our executive members to take over from the caretaker committee and more than ever before the future of the Alumni Group look secured.

This year, less than 5 months after we re-converged as Alumni Group from our different niches we have organized career day/ workshop at Festac Grammar School and we have awarded prizes to outstanding students.

We have made ourselves more visible in Festac Town and we have provided ourselves with the platform that will motivate the students attending Festac Grammar School. They are now in contact with us. We have a wonderful opportunity to be their role models and mentors.

For us this year is a success story in the history of our Alumni Group.

It is not yet Eureka! It must be pointed out that governments in Nigeria are fond of abandoning projects and looting the funds earmarked for such projects, even after the shameful 10% kickbacks. We hope that the re-construction work at Festac Grammar School will be neither a half-baked project nor an abandoned one.

Our hope is that this rejuvenation that will inspire and motivate the students and staffs of FGS.

The Alumni Group, as promised in a previous essay, will work closely with the leadership of the school to emphasize the importance of maintenance culture. On the long run too, we will have to find the appropriate communication channel to ease information flow between the Lagos State Ministry of Education and our Alumni Group. That will help us to know first-hand about the plans that are made for schools in Lagos and how often the structures will be checked for comfort and safety.

The academic aspect can also not be over emphasized. Quality control measures should be re-introduced while all hands must be on deck to rescue the “dying culture” of attending public schools.

No matter what happens, FGS will remain in our hearts and we will never relent until the image of the school both in terms of structure and academic excellence are revitalized fully. We are committed.