In the month of June 2016, I visited Nigeria. One of the most disgusting views in Lagos where l was resident was in Festac Town, the estate that everyone acknowledged had lost his glory.

In general l was appalled by the state of infrastructure in Festac Town.

A lot of things are rotting away and Festac Town that used to be the pride of Nigeria and Africa is now a desolate, rotten town.

Recently l wrote an article about the problem of sewage in Festac Town and the significance of the problem as a form of biological weapon against the people of Festac Town.

The article titled Governor Akinwunmi Ambode, Please Clear This Biological Weapon!  was published on July 25, 2016 both on the Nigeria Village Square and on my blog.

To ensure that the problem gains the attention it needed, l wrote the same article in the National Mirror Newspaper. It appeared on the back page on August 16 2016 under the banner Addressing Festac Town’s sewage menace.

Despite all the awareness that has been brought to the matter, it appears that the government (local, state and federal) did not get the message. A friend of mine visited Festac Town this November and the images that he brought back shows that no effort has been made to solve the problem. 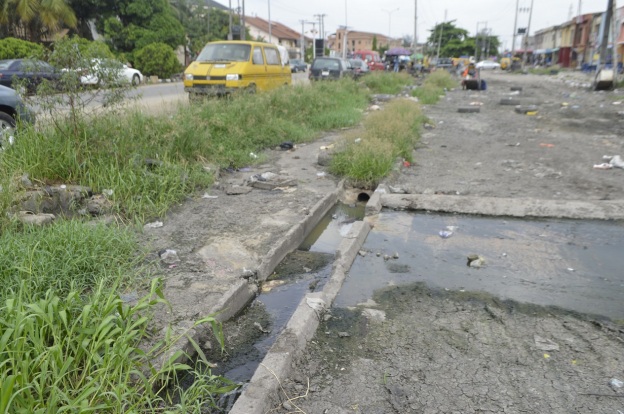 Let me restate that we will continue to highlight this problem for as long as it exists. In as much as we all agree that Festac Town is a federal government estate, we must also never forget that it is situated in Lagos State and there is a governor and there is a local government chairman.

Invariably, the sewage system is bad in many areas in Festac Town. The worst hit area is 402 Road. The residents are flushing their toilets directly to the streets because there are permanent blockages to the original paths created for the flow to flow away.

The residents of 402 Road in Festac Town are breathing unsafe air, they are walking on sewage water/mud to get into their various apartments. The health impacts are huge and children are vulnerable.

The governor of Lagos State is responsible for the welfare of the residents anywhere in Lagos. That insinuation and argument that Festac Town is a federal estate does not hold water. The governor needs to initiate the contact with the appropriate authority and call them out to action. 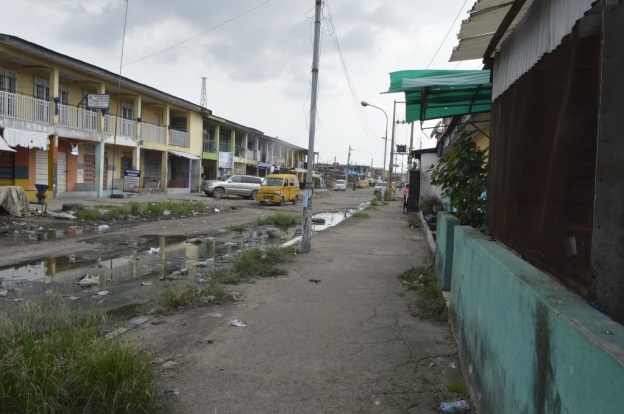 Governor Ambode and the people running Lagos must know that Lagos is not Victoria Island and Ikoyi only. They need to look at other places and stop paying lip-service and eye-service to issues concerning maintenance and development.

Again, l repeat that it is possible for the governor of Lagos State to look at this problem and instruct the appropriate authority (federal, state or local) to act.

As it sems right now, the people of Festac are in a dilemma. FHA is not going to come down to make their environment germ free. The Governor does not care if they die of diseases.

As l have stated before, l will continue to write about this particular problem for as long as it exists. I pray for the grace to keep reminding the rulers and conquerors of Nigeria of their negligences and lack of committment to the people and country.

This problem is a struggle and we will keep reminding the conquerors of Lagos/Nigeria that they must serve the people.

CULLED FROM THE NIGERIAN GUARDIAN, SEPT 22 2008

IN the wake of the scandal in China involving milk contaminated with the toxic industrial chemical melamine, three African countries-Tanzania, Gabon and Burundi have banned imports of Chinese milk products.

In Tanzania, the country’s food and drug authority said government officials at all border points had been ordered to be “extra vigilant with all dairy products from China including yoghurt, ice-cream powder and chocolate.”

It said experts had also been sent “to check retail and wholesale outlets for any possible traces of tainted milk that had made its way” into the east African country.

Authorities in Libreveille at the weekend banned the import of all brands of Chinese milk until further notice.

The government decree also said that Chinese powdered milk already in the shops would be taken off the shelves.

China admitted this week that milk powder contaminated with melamine, which is used in plastics, had made at least 6,200 babies ill nation-wide and killed four over a period of many months.

Yili, Mengniu and Guangming — big brands consumed and trusted by hundreds of millions of Chinese — were affected by the recall after authorities checked their products and found traces of melamine.

As well as Gabon and Tanzania, the brands incriminated in the scandal export to Bangladesh, Burundi, Myanmar and Yemen.

Melamine added to milk and other food products gives the appearance of higher protein levels.

Burundi became the third African nation to ban Chinese milk products, after tainted milk from the country killed four babies in China and made thousands of others ill, the government said.

“The trade, industry and tourism ministry is calling on importers and shopkeepers who stock Chinese milk to stop selling the product until the end of an investigation,” a ministry statement said.

“This measure also concerns the sellers of repackaged milk, whatever its origin,” added the statement, while urging consumers to keep a watchful eye on the packaging of milk products.

A special commission has been set up to investigate the scale of the tainted milk problem in Burundi and “take urgent measures to protect the population,” the statement said.

Four children have died and at least 6,200 are ill owing to milk products contaminated with melamine, an industrial chemical used in the manufacturing of plastics.

A Burundi consumer association, known as ABUCO, expressed concern that tainted milk products were already being stocked in the country’s shops.

“For the moment, nobody knows if the milk is being sold on the Burundi market,” said Noel Nkurunziza, the president of ABUCO.

On Saturday, Gabon and Tanzania banned Chinese milk products and all Chinese dairy

The World Health Organisation yesterday said it was helping China solve its tainted milk formula problem, while criticising the government for initially failing to alert the international community.

Does anyone knows how many African children that have died due to chinese poison. This is the same China that is becoming the main partner to African countries.

I hope these poisons from China are not being sent to Nigeria because that would add to the mortalities from malaria and other preventable childhood (respiratory) diseases.

Well done to Tanzania and the other countries. I hope that ALL countries in Africa will as a matter of fact stop the importation of poisonous food from China. Think about the children and their future, stop feeding them with poisons that would cause death and mental retardation.

Wake up Africa and make the best use of the resources and food in your own domain.

Follow @aderinola
...what if heaven is a place on earth?