Last week l asked Buhari why his cronies in the Halliburton scandal are still walking free. This week, Saraki’s supporters are asking why the judiciary is digging up Saraki’s criminal cases. Justice served to one must be served to all!

Saraki: Between Politics, Justice And The Common Good 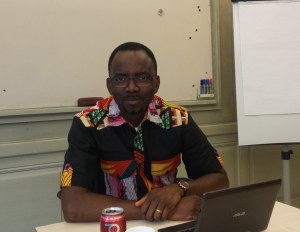 Yet, in my own opinion this is another opportunity to start the long-awaited process of social revolution in Nigeria.

Some people may think l am naive because of my expectations from the country called Nigeria. No l am not. I am just waiting for that final trigger that will gradually or suddenly eradicate all the criminal-parents and criminal-children of the criminal parents in Nigerian politics and military set-ups. These criminals together stole our future on the Nigerian soil.

As you read, they continue to steal the future of the unborn generation.

Nigeria has a long way to freedom as l always write at the end of my essays. The decay in Nigeria’s political arena remains massive and unprecendented.

The systemic decay since Nigeria’s independence in 1960 led to misrule, emergence of criminals in government and application of inappropriate political and military systems in the (mis)rule of Nigeria.

So in Nigeria today we have a confused generation coming on the trails of the persistent wasted generations.

My emphasis of labelling Nigerian politicians as criminals will be relevant until the cleansing process consumes all the consumables. I thought we should have cleansed the system by 2009 but now in 2015 Nigerians are still struggling daily with criminals in political offices spread across the country.

The struggle to cleanse the system will probably continue even when my confused and divided generation is long gone because the confusion and insincerity traits in Nigeria seems to have become genetic.

Sometimes some people ask, what is wrong with black people? They mean what is wrong with Africans? But it is this same people who become part of government and continue with the sickening syndrome of looting Nigeria and enriching themselves and their families.

So, indeed, what is wrong with Nigerians?

Don’t look too far. Some student rulers (not leaders) from western Nigeria made a student union budget recently and made the headlines for the wrong reasons. They blew the expenditures out of proportion and made room for looting. They are just students but already criminals!

This is a confirmation that corruption and political madness have become genetic traits in Nigeria and thereby pass-able from the wasted generation to the confused generation.

Criminality, an offspring of the decayed and corrupt system is seen as a legitimate right in Nigeria. Despite our weekly shout-outs, criminality and corruption continue to fight back, in massive doses.

On Bukola Saraki there is no need to be divided on the issue.

Nigerians have always failed to seize opportunities that could lead them to a social revolution, one that could bring some measure of justice and sanity to the polity.

True, Bukola Saraki is not the only criminal in public office. Almost all Nigerian politicians are criminals. So he can feel violated not because he is not guilty but rather because the police have not been given the go ahead to arrest Babangida, Abdulsalami and Obasanjo. In addition to corruption, there were state sponsor murders under these men!

Why is Saraki suitable for arrest and not the rest of the corrupt politicians in Nigeria?

This is where every government in Nigerians has failed! This is where Buhari-led APC just like Obasanjo-led PDP is adding to the endless problems in Nigeria.

You cannot handpick a criminal in the midst of thousands of criminals. It is wrong to start with one criminal when you have the net that can pick 10, 20 or even 30 at the same time.

You cannot chase one criminal out of a million. If an arrest warrant was given say to 10 or 20 alleged criminals or murderers irrespective of whether they are in service or retired, Saraki and his supporters will shiver even more.

Handpicking criminals and selectively prosecuting them are the hallmarks of political witch hunt. Saraki’s current war will be seen as a political vendetta no matter if that is true or not.

He has disobeyed all the tenets in the APC book since his deceptive cross-over from PDP. His dilemma is right in the face of the law.

However to handpick Saraki alone from a massive pool of criminals in the system is not fairplay.

This is where Buhari and APC are going wrong and perpetrating a system inconsistent with the war against corruption slogan. Make it real, make it total and don’t make it personal.

Last week l reminded Buhari of his friends and cronies in the Halliburton scandal. Why not open their cases parallel so everyone can see justice is universal and respecter of no one?

Irrespective of the interpretation of the Saraki dilemma, my position is that no matter how long it takes the law must be able to catch up with a criminal. Let all criminals go to prisons for a long time or forever. Let it be so.

Rather than try to shield Bukola, his confused supporters eating from the crumbs on his table or from the looted funds via the Nigerian Senate and the organised civil society owe it as an obligation to press the same judiciary and the police to ensure that known criminals like Babangida, Obasanjo and all the other hitherto untouchables are lined up next.

NANS supporting Bukola Saraki is just rubbish. NANS standing behind a criminal is yet another indication that corruption and criminality have become genetic in Nigeria. The children running NANS are part of a confused generation. What a sad situation!

To be clear, we always know that time is not a factor in criminal cases. The Bukola Saraki case justifies what some of us have us argued for. Bring criminals to justice no matter how long ago they committed their crimes.

Buhari and APC should stop playing with fire and time bombs. Stop the selective prosecutions! Bring the Halliburton criminals to justice as well!

I know some people support Saraki because they oppose Buhari and they are still in fetish love with Jonathan. Some of these people suffering from political hangover will even accuse Tinubu as being behind the Saraki’s dilemma instead of asking the judiciary and the police to extend their operations to cover all suspected political criminals.

Some people oppose Saraki not because they want the law system to work but rather because Saraki went against the desire of the APC in the National Assembly.

In 2007 around december 12 the EFCC took hold of one criminal called James Ibori. It was in those days when Facebook has not become widely used among Nigerians and the awareness created by the social media was still in incubation.

I wrote a piece on the NVS the next day after Ibori’s arrest on how EFCC should continue to pick up the remaining criminals and hoping that if they do that over a period of 2 years, Nigeria will be cleansed up to a large extent anyway.

But Ibori was let off the hooks in Nigeria. Again, it makes me look naive. I am not. I just want the best things to happen to Nigeria.

EFCC has proven to be largely a toothless bulldog. At some point it was Obasanjo’s tail in the hands of Ribadu-the servant of Adamawa.

EFCC is submerged in its own corruption cases. The ICPC too.

What happened to Ibori after his arrest is now history. Everyone who was not born yesterday knew that it took a foreign country to put him behind bars. It is just like an irony because the country where Ibori is currently jailed is loaded with looted monies from Nigeria.

There have been several cases after Ibori. Plea bargaining set many criminals on free foot in Nigeria. They pay a certain percentage of their loot, usually an insignificant sum to the Nigerian government and they walk free.

Sometimes even in the absence of plea bargaining many criminals have walked free or served ridiculous jail terms.

How should we reason at a time like this?

It seems that our awareness have reached a common threshold compared to when some of us where shouting alone at the top of our voices in 2002 or in 2007. How some of us have written on the same topic about Nigeria for several years is even worth reviewing.

When are we going to have the reach we desire so that one day Nigerians can collectively see the difference between good and evil irrespective of tribal inclinations or political affiliations?

Yes it is going to be a long way to freedom if Nigerians allow Saraki to escape justice in the court of law. Let him go there and argue his innocence.

This is the way forward if we want Babangida, Abdusalami, Obasanjo, Fani-Kayode, Akpabio, Tinubu and even Buhari in the same court of law so that they can give accounts of their stewardships in office.

Saraki’s dilemma can open the door to a social revolution. Nigerians, let it be. Ask that the justice be served round and sustained.

Why can’t we see it this way? Why can’t we seize the moment that can orchestrate the revolution of the people by asking the judiciary and the police to never stop until justice for one becomes justice for all?

2 thoughts on “Saraki: Between Politics, Justice And The Common Good”